9 most beautiful villages in France

Paris, the most visited city in the world, attracts millions of tourists every year due to its fantastic appeal and undeniable allure. However there is more to France than Paris; and if you are already well acquainted with the City of Lights or simply wish to experiment and travel outside the norm, there are lovely villages located in the French country ready for you to discover them.

Their setting is enough reason to skip the bustling, crowded cities. Often referred to as portals to the past, they usually include breathtaking vineyards whose flowery display is enough to enamored the sight.  Like looking at an old France, we’ve only been lucky to experience through Literature or a movie. Maybe it is their medieval architecture or the romantic air that France unequivocally emanates, but anyone who sets foot amidst that breathtaking landscape cannot but gasp in admiration –or well, sign in relax.

When considering a French village to visit, many are the options, and some lists are stricter than others. For instance, technically to be considered a village, the place has to include protected monuments or sites and have a population of 2,000 inhabitants or less.

We may not be as stringent because our primary purpose is to recommend a place that will leave you in awe. These are, without question, the most beautiful villages in France: (and don’t worry if you have a hard time pronouncing the names, a glass of Bordeaux and a crepe later, you will be as French as a croissant!) 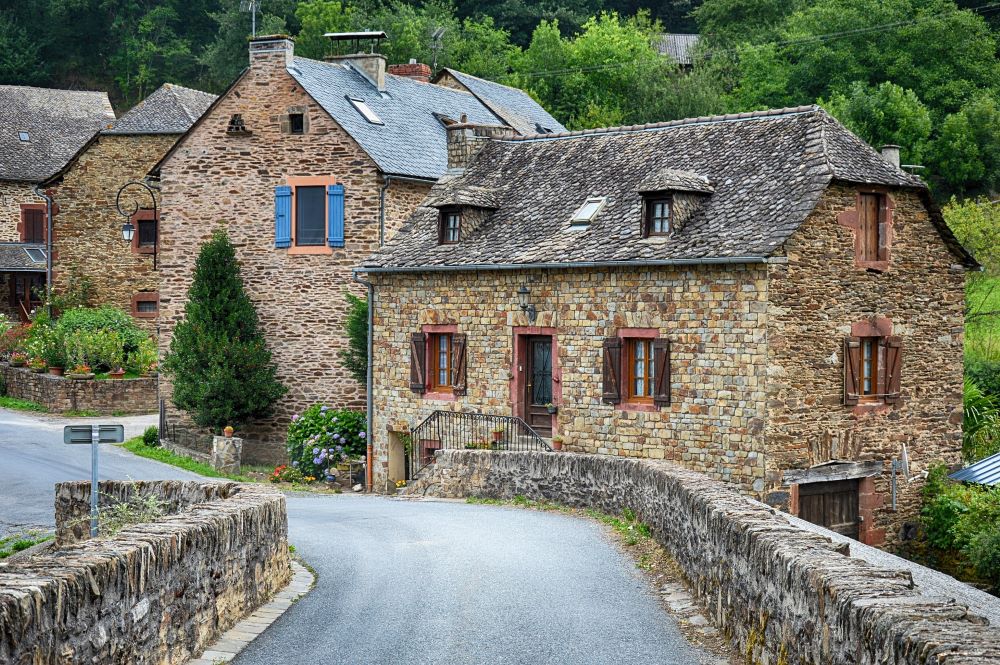 A fairytale feel wraps this village located on the Wine Trail; with narrow streets arranged in concentric circles surrounding the medieval castle. Colorful houses and darling flower blossoms seem to dance around the place and cheer for it. When walking through the paved streets, the sight of the balconies and flower-adorned wooden windows transport you out of this world. Its magnificent central fountain, the colorful Saint-Leon IX chapel are two more reasons to visit Eguisheim. The village comes alive in August with its wine grower’s festival and its stork festival.

This lovely town presents countless opportunities to acquire cultural knowledge and learn a bit of History; the village has managed to keep its charm despite the tourists and offers many stores, and restaurants to attend its visitors.

Tourists claim Le Cabeau des Douceurs to be the best restaurant in town with delectable dishes that reflected the iconic French cuisine mixed with some German heritage from the area. 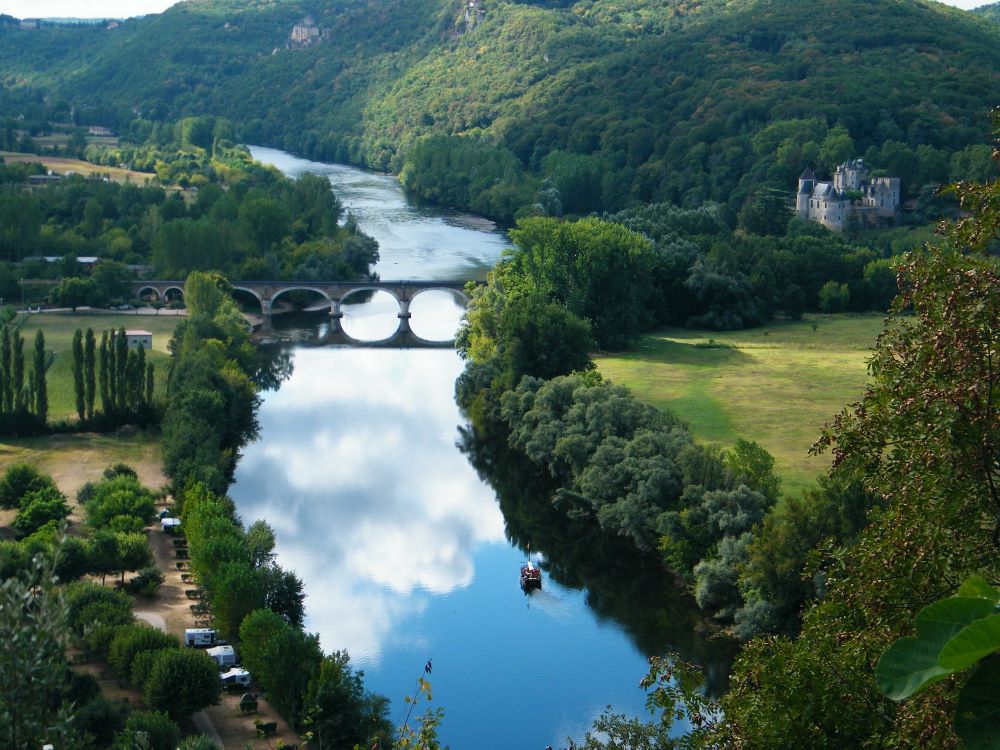 One of the most beautiful villages in France and erected into the cliffs along the River Dordogne, to the south-west of Sarlat. The beautiful Beynac-et-Cazenac extends along the river and up the hill behind all the way to the castle that stands above it. Narrow, lovely lanes imploring to be traveled and a collection of unique, quintessential to the spot white and yellow houses are two of the main attractions. By the way, visitors claim the buildings are best appreciated and admired under the light of sunrise; if you are an early riser you do not want to miss it!

Overlooking the village, one of the best preserved medieval castles in the country –Chateau de Beynac- dates back to the 12th century and bestows excellent views of the valley. A fun piece of trivia: opposite from Beynac across the river, is its historical enemy Chateau de Castelnaud.

Where to stay? If you’re wondering about accommodations, Hotel de Chateau is one of the best options; this family-run inn is ten minutes away from the Château de Beynac and less than 20 kilometers from the prehistoric cave paintings found at La Grotte de Font-de-Gaume.

If Paris is a museum turned city, then Kerhinet is an open-air museum disguised as a pedestrian village. An enchanting little community of less than twenty thatched-roofed cottages in the Loire Valley; it was remarkably restored by the Brière Regional Nature Park, Kerhinet gives the expression “go back in time” a precise meaning. If you decide to visit, you’ll find yourself admiring the village’s architecture, buying local artisan goods such as pate, jewelry, and honey and overall admiring the park’s rich diversity in flora and fauna. If you walk through the trail, you will find locals immersed in laundry tasks and evoke the genuine customs of the original inhabitants of the town. Do not miss Market day on Tuesdays where locals offer their best products and Before leaving, do not forget to go through the Chaumiere des Saveurs and Crafts!

It is impossible to talk about Yvoire without mentioning the fantastic Garden of Five Senses. The garden encompasses a living heritage preserved and the unique charm of medieval mazes. The place is enriched and manicured exquisitely. Depending on the season –or even the part of the day one visits- the garden offers different colors and yes! It allures, entices, and caresses each one of your senses. The things you will see, hear, smell, taste, and feel will leave an indelible print in you.

Yvoire is a member of  Les Plus Beaux Villages de France (The Most Beautiful Villages of France), and attracts thousands of tourists and locals every summer; which is the season when its flower-adorned streets offer a spectacular view. The cobblestoned alleys and endless medieval touches lead to the shores of Lake Geneva.

Locronan is named after her discoverer, Irish hermit Saint Ronan who found it in the Middle Ages. Afterward, in the 15th century, the Dukes of Brittany invested capital into building the extraordinary Gothic church.

Two of the “not-to-miss-spots” on the area is Chapelle du Pénity, which houses Saint Ronan’s tomb and Chapelle Notre-Dame-de-Bonne-Nouvelle which has stained-glass windows by 20th-century painter Alfred Manessier. Pilgrims often venture onto the hillside –the sacred path- where the best views from Locronan mountain and the Nevet woods can be appreciated.

A piece of trivia from this lovely village: Locronan is no stranger to motion pictures and has often been used as a filming location. You can appreciate its beauty on Roman Polanski’s melodrama Tess and “A Very Long Engagement” which was starred by Jodie Foster.

Time appears to have stood by at this village, set on Normandy’s now calmed frontier. Saint-Céneri-le-Gérei was founded by an Italian monk –named, you’ve guessed it! Saint Céneri- who built a monastery in the area in the 7th century. The Normans burned it although the church remains are still there and some of the inside murals have been recently restored.

Saint-Céneri-le-Gérei is set in the Mancelles Alps on the Sarthe River and is famous for having enamored several renowned painters such as Eugène Boudin and Camille Corot. The Museum Auberge des Soeurs Moisy houses many sketches and charcoal portraits of artists and villagers.

An interesting piece of trivia: the village has a “miraculous fountain.” The tale says, Saint-Céneri and his disciples were both very thirsty and were pleasantly surprised to discover a freshwater spring up in front of them. Besides, legend had it that this water could cure eye problems.

Château-Chalon grew up around a Benedictine abbey. The village’s streets are lined with winemaker’s homes, where the Savagnin grape is used to make vin jaune. One of its highlights without a doubt is the beautiful Romanesque church of Saint-Pierre, and the Maison de la Haute-Seille houses an interactive museum on wine. There’s an old cheese factory that has tours explaining how cheese comté is made (with unpasteurized cow’s milk!).

If you would like to venture to the countryside, you can go behind the village where you’ll encounter biking and walking trails leading to the beautiful landscape. Festivals and gourmet events are often held in the summer. If you happen to be there in July, do not miss the sound and light show.

This beautiful village is set in the very center of Alsace’s vineyards, in the foothills of Vosges Mountains. There’s no precise date in which Riquewihr was supposedly erected –somewhere between the 13th and the 16th century. However, and luckily for visitors, the place looks exactly the same as it did over four hundred years ago.

Riquewihr is famous for two things, mainly –aside from its beauty: its outstanding wine offering (one must have at least a bottle of Riquewihr’s Riesling, celebrated around the world). The second thing is its coined nickname “Gem of the Alsace Vineyards,” which refers to the spectacular cobbled streets and brightly and joyfully painted houses.

Last but not least, if you genuinely want to witness something out of the ordinary, La-Rouge must be included in your list. What makes La Rouge stand out from every other beyond-perfect French village?

All of its houses are lovely built utilizing local red sandstone. There’s nothing that compares to the view of a summer day where the bright red from the houses contrasts against the green fields of southern Limousin.

The list could go on, as no country rivals France when it comes to picturesque, historically rich villages. Wherever your preference is, our last tip is for you to immerse in the experience as much as you can: try authentic French dishes, buy local goods and… forget about your smartphone for a while! Unless it is to capture the village’s captivating views.